There are 5 images tagged with “eerie”.

Lanterns in the Fog

I just wanted to do something with lights in a dense fog.

Don't follow the lights!
This is another version of my birch woods scene.

Thy Light Is Come

“Arise, shine; for thy light is come, and the glory of the Lord is risen upon thee.
For, behold, the darkness shall cover the earth, and gross darkness the people: but the Lord shall arise upon thee, and his glory shall be seen upon thee.
And the Gentiles shall come to thy light, and kings to the brightness of thy rising.”
Isaiah 60:1-3

I created this for Easter, but it's also appropriate for Christmas

From Handel's Messiah
O thou, that tellest good tidings to Zion (Arise, shine; for thy light is come)
For, behold, darkness shall cover the earth

Into the Old Forest

Frodo and his friends are leaving the Shire secretly by going west into the Old Forest, instead of north to the road. The Forest is reached through a break in the Hedge used to keep the unfriendly trees out of the Shire …

“It had walls of brick at the sides, which rose steadily, until suddenly they arched over and formed a tunnel that dived deep under the Hedge and came out in the hollow on the other side.

“It was dark and damp. At the far end it was closed by a gate of thick-set iron bars. On the far side was a faint path leading up on to the floor of the Forest; but it vanished as soon as it brought them under the trees.”
— The Lord of the Rings, Book I, Chapter 6 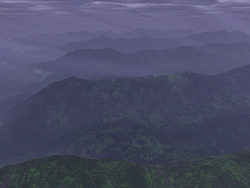 Fog on the Barrow Downs

“Eastward the Barrow-downs rose, ridge behind ridge, and vanished out of eyesight. The sun, a pale and watery yellow, was gleaming through the mist. Even as they looked out towards the setting sun, it sank before their eyes into a white sea, and a cold grey shadow sprang up in the East.”
- The Lord of the Rings, Book I, Chapter 8

I created this with Terragen 3D landscape generation software.