There are 2 images tagged with “walls”. 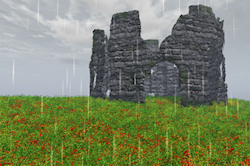 A great battle must have taken place here a long time ago, but all that's left now is a ruined tower in a field of poppies.

This image was created in Vue.

Into the Old Forest

Frodo and his friends are leaving the Shire secretly by going west into the Old Forest, instead of north to the road. The Forest is reached through a break in the Hedge used to keep the unfriendly trees out of the Shire …

“It had walls of brick at the sides, which rose steadily, until suddenly they arched over and formed a tunnel that dived deep under the Hedge and came out in the hollow on the other side.

“It was dark and damp. At the far end it was closed by a gate of thick-set iron bars. On the far side was a faint path leading up on to the floor of the Forest; but it vanished as soon as it brought them under the trees.”
— The Lord of the Rings, Book I, Chapter 6