There are 9 images tagged with “breeze”. 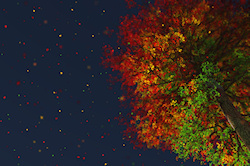 I have a maple tree in my yard that sometimes turns these colors in the fall - red on the outer leaves, then yellow, and the inner leaves still green. Other years, though, it just turns yellow. Then it's more like the tree in my Autumn Guardian.

When I was growing up in Japan the cherry blossoms would bloom just in time for my birthday in early April. It was a windy time of year, and there would often be showers of petals falling.

This is what you would see if you lay down on the ground under the cherry tree in my Cherry Tree Concerto scene.

It's been a year since I launched this website, so here's a picture in celebration. I've added 77 more images in the past year, 7 of which were new designs, for a current total of 120 images available for screen wallpaper and prints. This is my fall version of the seasonal globe idea.

This is my third version of the seasonal globe idea. Even though it's officially fall now, it still feels like summer, and there are lots of butterflies around.

Even the longest day of the year eventually turns to dusk, and the fireflies come out.

A while ago I had the idea of a “snow” globe with different seasons, and I finally got the spring version realized. I hope to do the other seasons as well.

This was my first time working with Vue's EcoParticle technology. It allows for objects, in this case cherry blossoms, to be scattered through the air. It's primarily for animations, but by choosing a point several seconds into the scattering I was able to get a nice still version.

This started out as a “mystery object” picture a while ago, with the camera closer to the windchime so it was harder to recognize. I later reworked it as a fall scene.

It looks nice for a picture, but it's a pain when you're out walking! This took over a week to render (at a larger size than this), mainly because of the blurring.