There are 31 images tagged with “flowers”.

I like to get plenty of use out of settings once I build them, so this render is around the corner to the left of my Cwm Solitude scene. I wanted to create a waterfall in the scene itself - often they're just a flat plane with a waterfall image that placed in the scene, or the waterfall is added later in PhotoShop. But this is an actual 3D waterfall that works from different angles. Eventually I hope to do another picture looking the opposite direction down the stream into the valley.

I like the word “cwm”, the way it's spelled and the way it sounds as well as the meaning. I would love to have a solitary retreat in a cwm like this. But this is my digital artwork, not a real place.

When I was growing up in Japan the cherry blossoms would bloom just in time for my birthday in early April. It was a windy time of year, and there would often be showers of petals falling.

This is what you would see if you lay down on the ground under the cherry tree in my Cherry Tree Concerto scene.

This is my third version of the seasonal globe idea. Even though it's officially fall now, it still feels like summer, and there are lots of butterflies around.

Even the longest day of the year eventually turns to dusk, and the fireflies come out.

A while ago I had the idea of a “snow” globe with different seasons, and I finally got the spring version realized. I hope to do the other seasons as well.

This was my first time working with Vue's EcoParticle technology. It allows for objects, in this case cherry blossoms, to be scattered through the air. It's primarily for animations, but by choosing a point several seconds into the scattering I was able to get a nice still version. 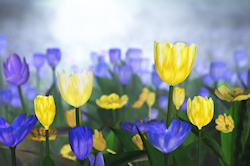 This is a rework of my earlier picture, Purple Jubilee with a different color scheme. I don't actually care much for yellow myself, but I try to branch out and use all colors on occasion. I know some people really like yellow and blue together …

I saw a picture with purple tulips in the sunlight and wanted to create something like it in Vue. There are lots of tulips planted in my yard, but because they were planted in the shade, they rarely bloom. Tulips like lots of sunshine!