There are 31 images tagged with “flowers”.

“I fancied I saw a thin blue smoke rising amongst the stems of larger trees in front of me; and soon I came to an open spot of ground in which stood a little cottage, so built that the stems of four great trees formed its corners, while their branches met and intertwined over its roof, heaping a great cloud of leaves over it, up towards the heavens. The cottage, I now saw, was built of the stems of small trees set closely together.…

“I had just time to see, on the edge of the denser forest, a single large ash-tree, whose foliage showed bluish, amidst the truer green of the other trees around it. A shadow as of a large distorted hand passed slowly over the little blind, and then as slowly returned in the opposite direction.

“‘He dares not come nearer than he is now, for any of those four oaks, at the corners of our cottage, would tear him to pieces; they are our friends. But he stands there and makes awful faces at us sometimes, and stretches out his long arms and fingers, and tries to kill us with fright; for, indeed, that is his favourite way of doing. Pray, keep out of his way to-night.’” 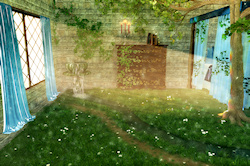 “I lay and looked through the eastern window of my room. The curtains of pale blue silk fell like a cataract over the windows. A large green marble basin, which stood on a low pedestal in a corner of my room, was overflowing like a spring, and a stream of clear water was running over the carpet. And where this carpet, which I had myself designed to imitate a field of grass and daisies, bordered the course of the little stream, the grass-blades and daisies seemed to wave in a tiny breeze that followed the water's flow.

“My dressing-table was of black oak, with drawers all down the front. These were elaborately carved in foliage. I happened to fix my eye on a little cluster of ivy-leaves. The first of these was evidently the work of the carver; the next looked curious; the third was unmistakable ivy. I saw that the branches and leaves designed upon the curtains of my bed were slightly in motion. Springing from the bed, my bare feet alighted upon a cool green sward; and I found myself under the boughs of a great tree, whose top waved in the golden stream of the sunrise with many interchanging lights.

“Faint traces of a footpath, much overgrown with grass and moss, were discernible along the right bank. ‘This,’ thought I, ‘must surely be the path into Fairy Land”.’ 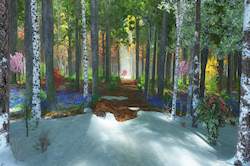 The coming year in perspective. 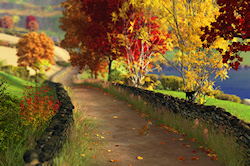 Autumn in the Glen

Going down the lane seen in Glen of the Twins on a sunny autumn day. Can you see the kitties? 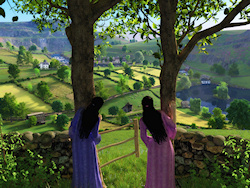 Glen of the Twins

Happy birthday to my twin nieces, Esther and Elodie! This is the sort of scene I'd like to be looking down on - they have so much to explore! 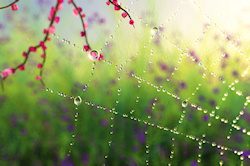 Gems of a Spring Morning

I love mornings with lots of dew on the grass.

Which is your favorite?

I love blue flowers - there aren't that many.

I decided to do a summer version of my Winter Leaves work.

I created a version of this picture several years ago, but I never posted it because I wasn't quite satisfied. So I decided to take another look and polish it a bit. I ended up changing more than I had intended, but I'm pretty happy with it now. Here's the earlier version.

I love sitting outside around dusk and watching the fireflies!